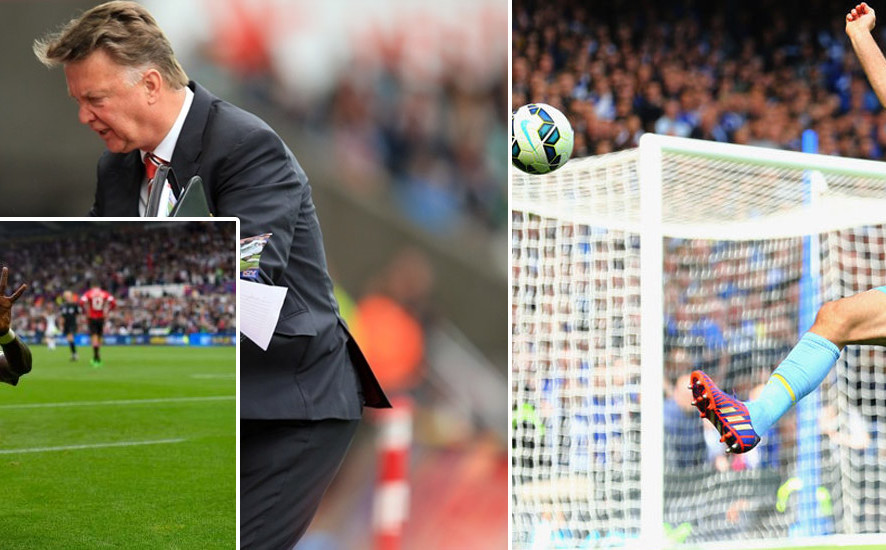 Crystal Palace claimed a shocking 2-1 victory at Stamford Bridge as Chelsea’s stuttering start to the season continues. Jose Mourinho’s side only lost three times in the Premier League in 2014/15 as they claimed the title at a canter, but they already have two defeats to their name this term – with Palace pulling off a stunning win over their London rivals.

Joel Ward proved the unlikely hero for the Eagles, the defender brilliantly heading home on 81 minutes, shortly after Radamel Falcao had cancelled out Bakary Sako’s opener.

Chelsea are now eight points behind leaders Manchester City, who maintained their 100 per cent record with a 2-0 victory over Premier League new boys Watford at the Etihad. The Hornets had held Manuel Pellegrini’s side at bay in the first half, but City stepped up a gear after the break and were in front less than two minutes after the interval.

Raheem Sterling was the man to make the breakthrough, the £49million summer signing from Liverpool converting Bacary Sagna’s cross to claim his first goal in City colours, before Fernandinho doubled their lead following a fine pass from David Silva.

The victory is City’s 10th in succession, breaking a 103-year-old club record, and Pellegrini’s side look in fine shape to wrestle the title back from faltering Chelsea.

Philippe Coutinho was sent off on a miserable afternoon for Liverpool as West Ham won 3-0 to triumph at Anfield for the first time in more than 50 years. The Reds had not conceded in their opening three games of the season, leading Brendan Rodgers to hail the defensive improvements made by his side in the build-up to the Hammers’ visit to Merseyside.

But Rodgers still has plenty of work to do on this – with Martin Skrtel and Dejan Lovren at fault as West Ham stormed into a 2-0 lead in less than 30 minutes.

Manuel Lanzini was the first to take advantage of the defensive frailties on show by the Merseysiders, latching on to Skrtel’s poor clearance with less than three minutes on the play to claim his first goal for the London club.

Mark Noble then took advantage of some woeful defending from Lovren to double the visitors’ lead – and it got worse for Liverpool when Coutinho was shown a second yellow card.

Noble was harshly sent off after the break to give the home side hope, but that did not deter Slaven Bilic’s side and they rounded off an impressive win in injury time through Diafra Sakho.

Leicester remain unbeaten after Jamie Vardy’s late penalty earned them a 1-1 draw at Bournemouth. Callum Wilson’s fourth goal in two games looked to have earned the newly-promoted Cherries their second straight victory, but Vardy was felled in the box with four minutes left to play and kept his cool from the spot to snatch a point for the Foxes.

Aston Villa and Sunderland played out an entertaining 2-2 draw at Villa Park. The Black Cats led through a superb strike from Yann M’Vila but two goals from Scott Sinclair, the first a penalty, put the home side ahead.

Jeremain Lens struck to claim a point for the visitors – but Dick Advocaat’s side are still yet to win in the Premier League this season.

Stoke also remain without a victory this season as they crashed to a 1-0 defeat at home to West Brom.

The Potters had Ibrahim Afellay and Charlie Adam sent off in the first half and the Baggies duly took advantage with summer signing Salomon Rondon earning Tony Pulis the victory against his old club.

Now that you’ve gone through the Premier League Round-up for this week, we hope you know who to put your money on in the Premier league bets come next week.

The Baba Ijebu team gives you the latest football news to help you stay up to date with football happenings, and boost your chance of winning when you place that bet. Stay tuned.