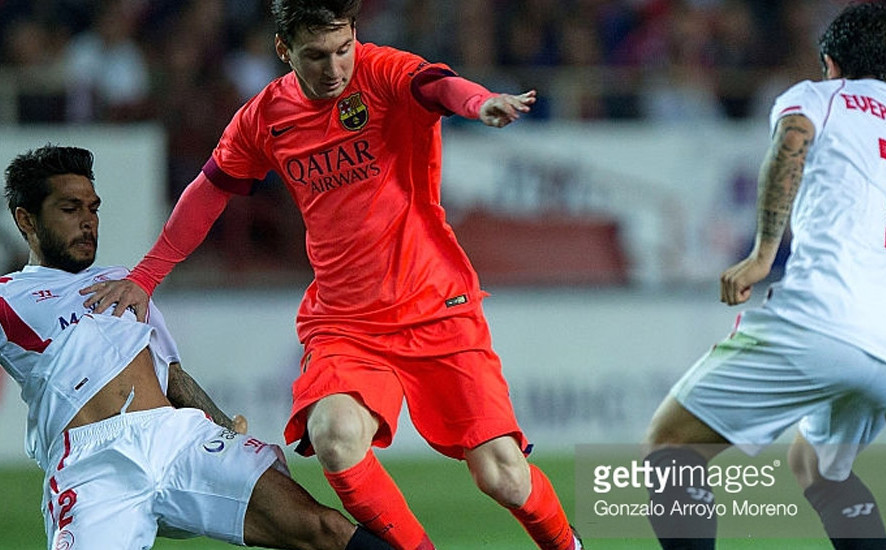 Celta Vigo Vs Getafe
19:30 PM, 2 Oct
This was the last face-off that Celta played before their last relegation into the second tier (2006/07).
Their 2-1 victory against Getafe did not prevent them from being relegated from the elite. Getafe has never won in the Balaidos in the five games they’ve played there, even failing to keep a single clean sheet. Their best result ever in the Balaidos was a draw (1-1 February 2014).
Celta has only beaten Getafe in one of their last five games (D1 L3).

Sevilla Vs Barcelona
15:00 PM, 3 Oct
Both teams head into this game on the back of their midweek escapades in the UEFA Champions League, and even though both teams had contrasting fortunes in Europe (Sevilla lost 2-0 to Juventus, while Barcelona defeated Leverkusen 2-1), this match still promises to be a cracker.
The last game between these two sides was the European Super Cup, where the Catalans defeated the Andalusians 5-4 with Pedro, who has since left Barcelona, scoring a late winner.
The last time Sevilla defeated Barcelona in La Liga was in March 2007; 2-1 with a winning free-kick goal from Dani Alves.

Granada Vs Deportivo La Coruna
17:15 PM, 3 Oct
If recent form is to be considered, then obviously Granada stands absolutely no chance against Deportivo, as they have been totally dismal all season.
Granada has not been defeated by Deportivo in the top tier since April 1972 (W3 D3). They have only lost once on home soil against Deportivo in La Liga (W7 D3 L1) and they have always scored at least once.

Las Palmas Vs Eibar
21:00 PM, 3 Oct
This is the first game between these teams on the top tier. Las Palmas haven’t lost to Eibar in their four last matches at home, all of them in the second tier (three wins by 1-0 and a draw).
The team from the Canaries have only shipped one goal at home this season. Las Palmas won their first match in their last game at home, 2-0 against Sevilla.

Malaga Vs Real Sociedad
21:05 PM, 3 Oct
Malaga has only won once in their last eight games against Real Sociedad and it was on the road (D3 L4). They have been unable to win in their last eight games (D3 L5). The last time they went as many games without winning was between March-August 2010 (12).
The Basque team have collected two clean sheets in a row. They have not managed three consecutive shutouts in La Liga since January 2012.

Athletic Bilbao Vs Valencia
15:00 PM, 4 Oct
Since Valverde became Athletic’s manager again, all four games between these sides have ended level. The Basque team have lost two of their first three games at home. The last time this happened was in the 2010/11 season.

Levante Vs Villareal
17:15 PM, 4 Oct
The Levantes have been defeated in their last four games against Villarreal in La Liga, without scoring a single goal.
At home, Levante have lost six of their seven games against Villarreal in the top tier, with only one win; 1-0 in March 2012. Levante are on a 10 game winless streak in La Liga (D5 L5), their worst streak since 2007. Having this in mind, La Liga betting fans should already know where to place their odds J

Atletico Madrid Vs Real Madrid
19:30 PM, 4 Oct
Real Madrid head into the game in very good form and remain unbeaten in all competitions this season, conceding only one goal, their latest win being 2-0 away from home against Malmo FF in the UCL which saw superstar Cristiano Ronaldo become Real Madrid’s joint all-time top scorer and also saw him score his 500th and 501st career goals. Atletico on the other hand lost at home to SL Benfica.
This match promises to get the football betting fans off their feet as in the past.
Atlético have only lost one of their last eight games against Real Madrid in all competitions (W4 – D3), the most recent one (1-0 in the Champions League). Real Madrid has not been able to win in their last five visits to Vicente Calderón in all competitions (D2 L3). If they don’t win this one, they will equal their worst ever winless streak in the venue (from 1956 to 63). Real Madrid also hasn’t scored in their last four visits to the Calderón in all competitions; their worst streak on Atletico’s home ground.