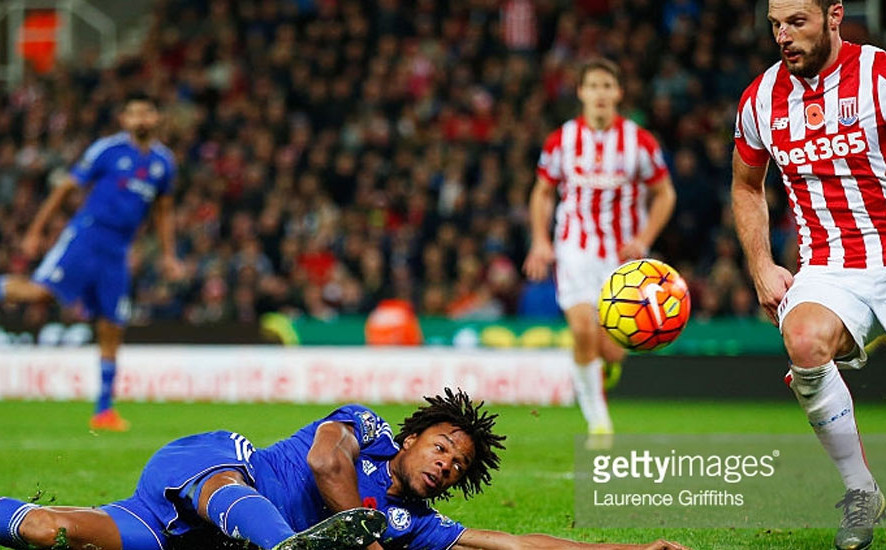 Arsenal Vs Tottenham 1-1
Kieran Gibbs came off the bench to bundle in a late equaliser and rescue a 1-1 draw for Arsenal against Tottenham on Sunday.
Harry Kane slotted past Petr Cech in the first half to give Mauricio Pochettino’s side a deserved lead against a Gunners team lacking any real spark in attack.
Olivier Giroud hit the crossbar with a second-half header and glanced another effort just wide, but Cech kept Arsenal in the match with fine saves to deny Toby Alderweireld and Christian Eriksen.
And the goalkeeper’s performance proved pivotal when substitute Gibbs converted Mesut Ozil’s cross at the far post 13 minutes from time to secure a share of the spoils for the home side.

Aston Villa Vs Manchester City 0-0
Rock-bottom Aston Villa held Premier League leaders Manchester City to a 0-0 draw in manager Remi Garde’s first game in charge.
The home side did not offer much of an attacking threat at Villa Park, failing to register a shot on target, but produced a brave defensive display for their new boss to halt a dreadful run of seven consecutive league defeats.
Aleksandar Kolarov hit the post in the first half and Raheem Sterling felt he should have been awarded a penalty after being felled by Ciaran Clark.
Sterling and Kevin De Bruyne missed good chances after the break and Fernando struck the crossbar in injury time on a frustrating Sunday for City, who failed to score for the second away league game running following last month’s draw at rivals Manchester United.

Liverpool Vs Crystal Palace 1-2
Scott Dann’s header eight minutes from time earned Crystal Palace a 2-1 win over Liverpool at Anfield on Sunday as Jurgen Klopp suffered his first defeat since taking charge at Anfield.
A month since his appointment as manager, Liverpool’s steady progression under Klopp was curtailed by goals from Yannick Bolasie and Dann either side of Philippe Coutinho’s equaliser as Palace continue to prove tricky opposition for the hosts.

AFC Bournemouth Vs Newcastle 0-1
Newcastle United goalkeeper Rob Elliot made light of fitness concerns by turning in an inspired display as Steve McClaren’s team stole a 1-0 win over fellow Premier League strugglers AFC Bournemouth with a goal from Ayoze Perez.
Striker Perez netted the winner after 27 minutes from Newcastle’s only shot of the first half.
That measured up to 12 attempts on goal from Bournemouth in the opening period but Elliot – whose thigh problem left Newcastle pondering a plunge into the emergency loan market this week – ensured there would be no way through.
Wasteful finishing also played its part as Eddie Howe’s side drew a blank for the third consecutive match in all competitions.

Leicester City Vs Watford 2-1
Jamie Vardy moved one behind Ruud van Nistelrooy’s record of scoring in 10 consecutive Premier League games as two calamitous errors from Heurelho Gomes gave Leicester City a 2-1 victory over Watford.
Shortly after allowing N’golo Kante’s tame strike to squirm through his grasp for Leicester’s opener, Gomes raced from his line and conceded a penalty which Vardy, after taking the ball from team-mate Riyad Mahrez – powered home.
Claudio Ranieri’s side made life difficult for themselves with 15 minutes remaining, as Kante brought down substitute Juan Carlos Paredes in the box, and Troy Deeney stepped up to roll in his second Premier League goal.

Manchester United Vs West Brom 2-0
Jesse Lingard’s first goal for Manchester United and a late Juan Mata penalty secured a 2-0 Premier League win over West Brom at Old Trafford on Saturday.
Louis van Gaal’s side snatched a late goal in midweek against CSKA Moscow and the match looked to be following a similar pattern as West Brom’s defensive approach kept them at arm’s length.
But Lingard broke the deadlock with a fine finish shortly after half-time as United finally made their dominance count.
Saido Berahino, surprisingly left on the bench, headed a wonderful chance over the crossbar in the closing stages as West Brom looked for an equaliser, but United extended their lead in injury-time as Anthony Martial was fouled by Gareth McAuley – an offence which earned the Northern Ireland international a red card – and Mata netted from the spot.

Norwich Vs Swansea City 1-0
Jonny Howson scored with 20 minutes to go to give Norwich City a crucial 1-0 victory over Swansea City in the Premier League.
Alex Neil’s men went into Saturday’s game at Carrow Road having lost four consecutive top-flight games, but ended that streak with a gutsy home win in a match of few clear chances.
Howson’s decisive close-range header came moments after Gylfi Sigurdsson had hit the crossbar at the other end midway through the second half.
The victory moves Norwich to within one point of out-of-form Swansea, who failed to register a shot on target and have now won only once in their last eight Premier League matches as the pressure grows on manager Garry Monk.

Stoke City Vs Chelsea 1-0
Marko Arnautovic’s second-half goal gave Stoke City a 1-0 victory over Chelsea to pile yet more pressure on the absent Jose Mourinho.
Chelsea boss Mourinho was not at the Britannia Stadium on Saturday as he served a one-match stadium ban following his sending off against West Ham, and there was little to cheer the Portuguese – reportedly watching on television from the team’s hotel – as his side fell to a result that marked his worst league run as a manager.
Arnautovic’s acrobatic goal ultimately proved the difference, as the Austrian forward scored with an excellent finish after 53 minutes.
Pedro shot against the post as Chelsea pushed for a leveller late on, but that was the closest they went to finding an equaliser.

Sunderland Vs Southampton
Southampton extended their unbeaten run away from home in the Premier League this season with a 1-0 win over Sunderland at the Stadium of Light on Saturday.
Ronald Koeman’s side dominated proceedings for much of the match, but required a penalty to make it six top-flight games in succession, home and away, without defeat.
The breakthrough finally came for Southampton in the 69th minute, with Tadic converting from the penalty spot after Yann M’Vila brought down Ryan Bertrand.

West Ham United Vs Everton
Romelu Lukaku scored for the seventh consecutive match against West Ham as Everton came from behind to extend their unbeaten Premier League run against the London club to 15 matches with a 1-1 draw.
The Belgian striker added to his record of having netted in every game he has played for Everton against West Ham to earn Roberto Martinez’s side a deserved point in the capital.
Manuel Lanzini’s first goal at Upton Park put the hosts ahead on the half-hour mark, but Lukaku’s cool finish from Gerard Deulofeu’s defence-splitting pass levelled matters before the break.