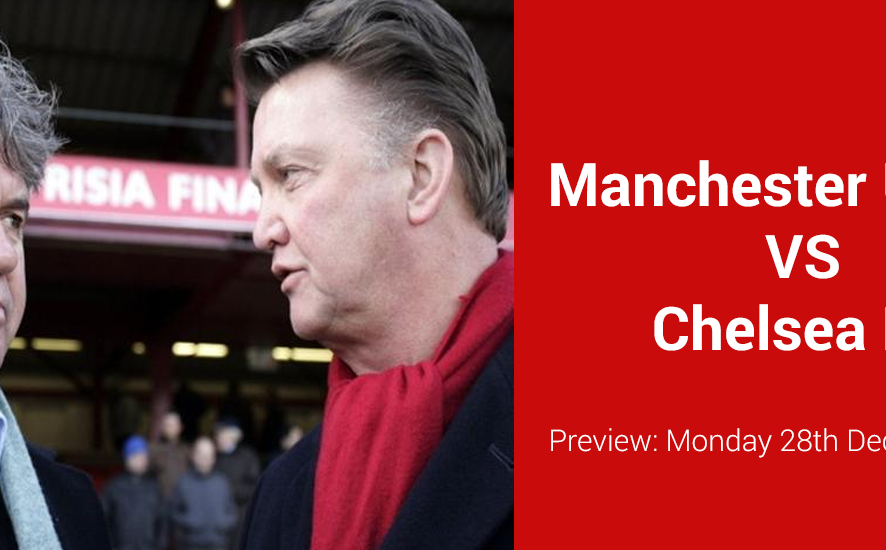 Just when you thought things couldn’t get any worse for Man United and Louis van Gaal, they were soundly beaten by Stoke on Boxing Day and they now trail the top four by three points.
Not only did they fail again, they also failed to score, and out of the rest of the top half of the division, there is only Liverpool who have netted fewer.
It’s actually a bit of a surprise than LVG is still the manager for this fixture and if he doesn’t deliver the three points today, it has to be odds-on that he will either be relieved of his duties or, as he threatened after the Stoke game, simply walk away.
Wayne Rooney was dropped for the trip to the Britannia and that proved to be a mistake as United didn’t look dangerous until he was introduced at half time. There’s no doubt that England’s record scorer will be starting for this one and history shows that when he’s got a point to prove, he usually proves it emphatically.
Bastian Schweinsteiger is available again following suspension and Matteo Darmian may be back from injury. If the manager wants to freshen things up further, Morgan Schneiderlin could be slotted into the midfield as well.

Life post Jose Mourinho started well with a comfortable win over Sunderland but Chelsea failed their next test by only drawing with Watford at Stamford Bridge. Obviously The Hornets are in a rich vein of form, but a club of the stature of Chelsea should be beating them at home.
It’s also worth remembering that that game was the first that Guus Hiddink took charge for and there has to be a couple of lingering doubts about his current mind-set following his disastrous stint as Netherlands manager.
Diego Costa netted twice on Boxing Day but his temperament caught up with him and he picked up his fifth yellow card of the campaign, meaning that he’s suspended for the trip to Old Trafford.
Loic Remy is the only alternative if Hiddink wants a like for like replacement, or he could opt to restore Eden Hazard to the starting line-up, fielding his as a false nine, like how Mourinho did at White Hart Lane.
Match Odds
Manchester United 2.45                     Draw 3.10                   Chelsea FC 2.90

It’s not often that these two clubs meet with the Premier League title not even an afterthought but that’s what we have here. The visitors are in the slightly better form but they are hardly pulling up any trees.
United’s best results this term have come against the bigger clubs as they have already beaten Spurs, Liverpool and Everton, and drawn against Man City. All of those bar Everton came on this ground and with Chelsea also expected to set the tempo and do some attacking themselves, I think the hosts will enjoy some success this evening.
The reigning champions have a shocking away record this year – played eight, won one, drawn two and lost five. And while Man United were beaten by Norwich the last time we saw them at Old Trafford, prior to that they were undefeated – winning four and drawing three.
Over/Under 2.5 Goals
Over 2.5 Goals 2.30    Under 2.5 Goals 1.55
We’re going to go against our usual method for this market as although the stats are pointing towards a low-scoring affair, we are tempted greatly by the 2.30 on offer for over 2.5 goals.
It’s now or never for Louis van Gaal and as he seemingly becomes more desperate than ever, we think he will send out his players to attack the Chelsea defence as much as possible.
The Blues have conceded 29 goals in 18 Premier League fixtures this season, with over half of them coming on the road. They have conceded two or more in half a dozen of their eight away games, but they did score at least once themselves at Leicester, West Ham, Newcastle, Everton and West Brom.
Due to the current plight of both teams we are quite confident that the atmosphere inside Old Trafford will be electric and that we will be in for a high tempo from the off.
If luck is on our side and we get an early goal, this match could really take off and we wouldn’t put you off backing over 4.5 goals at 9.00. You may not get all five that you need, but it will hopefully trade much shorter in-play, giving you plenty of opportunity to cash out for a profit.
Recommended Bets
Back Man United @ 2.45                    Back Over 2.5 Goals @ 2.30