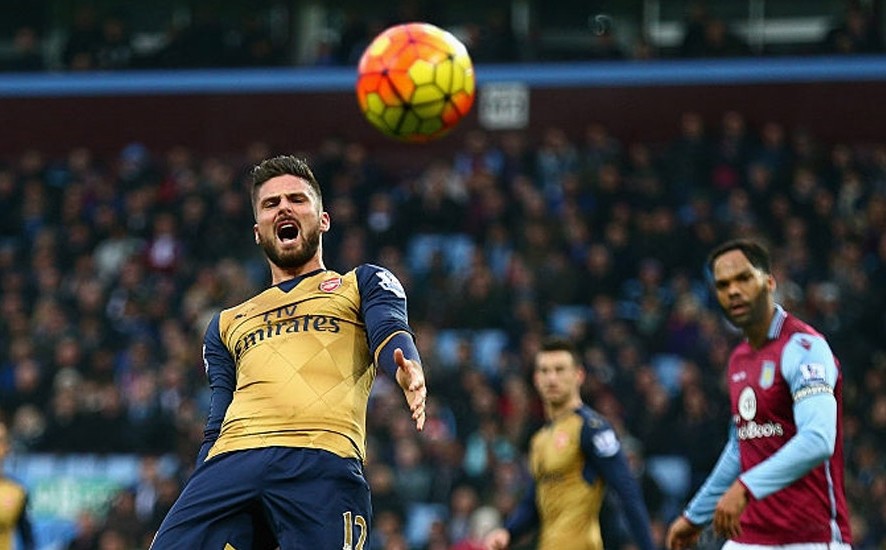 Aston Villa Vs Arsenal 2-0
Olivier Giroud’s 50th Premier League goal helped send Arsenal to the top of the table in a 2-0 victory over struggling Aston Villa at Villa Park on Sunday.
The Frenchman’s rich vein of form continued as he opened the scoring from the penalty spot against Remi Garde’s side, whose winless run in the top flight now stands at 15 matches. Mesut Ozil laid on his 13th Premier League assist this term to set up Aaron Ramsey for Arsenal’s second shortly before half-time, and there was no looking back for Arsene Wenger’s side.

Liverpool Vs West Brom 2-2
Divock Origi scored in injury time to earn Liverpool a 2-2 draw with West Brom at Anfield on Sunday.
Jonas Olsson’s 73rd-minute header looked to have sealed a famous win for the visitors after Craig Dawson had capitalised on a Simon Mignolet mistake to cancel out Jordan Henderson’s opener at Anfield, but Divock Origi had the final say by scoring a deflected strike in the 90th minute.

Tottenham Vs Newcastle 1-2
Newcastle United climbed out of the Premier League relegation zone with a last-gasp 2-1 comeback win at Tottenham.
Mauricio Pochettino’s men seemed set to extend their unbeaten run in the league to 15 matches and climb into the top four after Eric Dier glanced home his third goal of the campaign from Christian Eriksen’s 39th-minute corner.
Steve McClaren’s visitors offered little as an attacking force until the 74th minute, when Aleksandar Mitrovic pounced 109 seconds after coming on as Tottenham failed to deal with a Jack Colback set-piece.
Spurs were then unsettled as Newcastle attacked them with renewed ambition and they could not hold out – Mitrovic turning creator for fellow substitute Ayoze Perez to drill a shot through Hugo Lloris from a tight angle in the third minute of stoppage time.

AFC Bournemouth Vs Manchester United 2-1
Manchester United slumped to their second defeat in four days as they were downed by newly promoted Bournemouth, who richly deserved a famous 2-1 victory.
After just two minutes Junior Stanislas opened the scoring with a curling corner, which eluded David De Gea and entered the net to the delight of the home crowd.
United responded well to going behind and Anthony Martial wasted a great chance before Marouane Fellaini made it 1-1 by half-time with a scrappy equaliser. The match winning goal came from Joshua King in the 54th minute.

Crystal Palace Vs Southampton 1-0
Yohan Cabaye fired Crystal Palace into the top six of the Premier League as Alan Pardew’s side saw off Southampton 1-0 on Saturday.
The midfielder struck his fifth goal of the season, seven minutes before the break, after fine approach work from Yannick Bolasie.

Manchester City Vs Swansea City 2-1
A deflected injury-time winner gave Manchester City a fortunate 2-1 Premier League win over Swansea City in a thrilling finish at the Etihad Stadium.
Wilfried Bony put caretaker manager Alan Curtis’ men seemingly on course for defeat with a 26th-minute header.
Substitute Bafetimbi Gomis levelled for Swansea as he lashed into the top corner at the near post in the final minute of normal time.
But there was one last twist in the tale as Yaya Toure’s curling effort took a huge deflection off Kelechi Iheanacho and looped into the net.

Norwich City Vs Everton 1-1
Norwich City and Everton shared the points at Carrow Road on Saturday as Wes Hoolahan cancelled out in-form Romelu Lukaku’s opener in a 1-1 draw.
Deulofeu provided the assist as Lukaku became the first Everton player to score in six consecutive Premier League games, but Martinez’s side – who saw John Stones shake off a knock in the warm-up to play the full 90 minutes – failed to make the most of their superiority.
Hoolahan marked his return from a knee injury with the equaliser two minutes into the second half as Norwich claimed a point.

Sunderland Vs Watford 1-0
Odion Ighalo’s early goal was enough to see Watford secure a 1-0 victory at Sunderland on Saturday and rise to seventh place in the Premier League.
The Nigeria striker proved a nuisance throughout, with his ability on the ball constantly troubling the Sunderland defence, and some clever movement in the fourth minute made the difference when he turned in Allan Nyom’s low cross.

West Ham United Vs Stoke City 0-0
Jack Butland kept West Ham at bay to record his seventh clean sheet of the season and earn Stoke City a 0-0 draw at Upton Park on Saturday.
Marko Arnautovic and Mauro Zarate both hit the woodwork and Mame Biram Diouf was denied twice by West Ham goalkeeper Adrian after coming off the bench in a frantic finale.