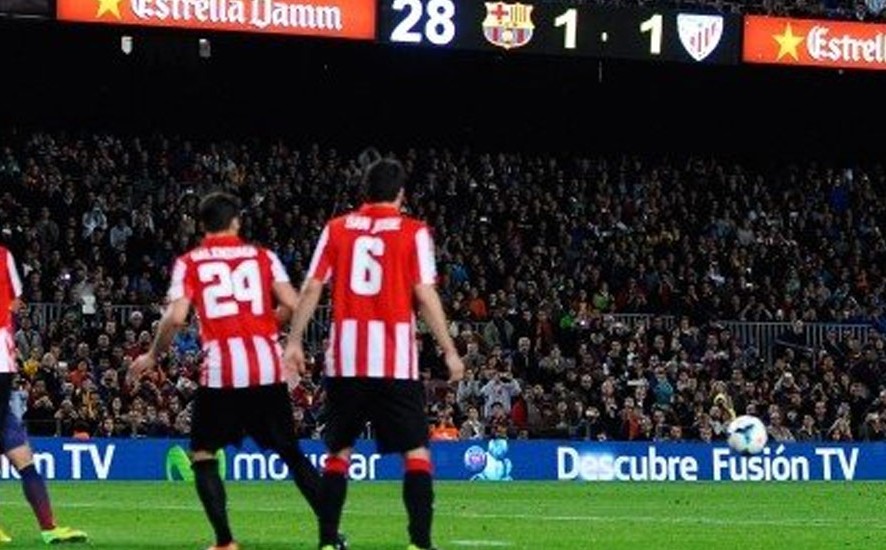 Barcelona Vs Athletic Bilbao 6-0
Luis Suarez’s hat-trick helped Barcelona extended their dominant La Liga record against Athletic Bilbao with a crushing 6-0 victory over the 10-man Basque side at Camp Nou on Sunday.
Goalkeeper Gorka Iraizoz saw red after just four minutes for bringing down Suarez and, after Lionel Messi drilled home the resulting penalty, Barca’s 12th win in 12 against the Basque side never looked in doubt.
Further goals from Suarez (3), Neymar and Ivan Rakitic sealed the comfortable win.

Getafe Vs Espanyol 3-1
Getafe came back from a goal down to defeat Espanyol 3-1 in their matchup at the weekend
Espanyol’s Hernan Perez had given them the lead in the 26th minute, but that lead only lasted 3 mins, as Pedro Leon equalized, and further goals from Pablo Sarabia and Moises secured the win.

Las Palmas Vs Atletico Madrid 0-3
Atletico Madrid assured they would finish the weekend at the top of La Liga with a 3-0 victory over Las Palmas.
Diego Simeone’s men took the lead through Filipe Luis, before Antoine Griezmann sealed the win with two late goals, the 3rd being a rapid counter-attack that caught the Canary Islanders off guard.

Real Madrid Vs Sporting Gijon 5-1
A formidable start from Real Madrid’s attacking trident was the key to victory at the Santiago Bernabeu, as Zinedine Zidane’s side destroyed Sporting Gijon 5-1.
Gareth Bale, who scored a hat-trick against Deportivo La Coruna, opened the scoring with a header before Cristiano Ronaldo and Karim Benzema – making his 300th Madrid appearance – struck stunning goals to make it 3-0 after just 12 minutes.
Ronaldo and Benzema added another goal each before the break as the Bernabeu took to singing happy birthday to Alvaro Arbeloa, and Isma Lopez’s second-half goal did little to dampen the party mood as Zidane made it two wins from two in La Liga, with an injury to Bale the only real sour note for the home side.

Valencia Vs Rayo Vallecano 2-2
A late goal from Paco Alcacer salvaged a 2-2 draw for Valencia against Rayo Vallecano.
Jozabed had given Rayo the lead in the 15th minute of the first half, but Alvaro Negredo equalized 10 mins after Halftime. Diego Llorente must have thought his 69th minute goal was the winner, but Alcacer equalized with 2 mins of the match remaining to secure a precious draw for Valencia.

Celta Vigo Vs Levante 4-3
A thrilling match between Celta Vigo and Levante ended 4-3 in favour of the home side
John Guidetti scored two, while Orellana and Iago Aspas were the other scorers for Celta, with Levante getting their 3 goals through Deyverson, Pedro Lopez and Jose Luis Morales.

Real Sociedad Vs Deportivo La Coruna 1-1
Real Sociedad had 16 shots in this game, but they managed to find the back of the net only once through Xabi Prieto to give them a 1-1 draw against Deportivo after Luis Alberto had given Deportivo a first half lead.

Sevilla Vs Malaga 2-1
Two first half goals from Kevin Gameiro was enough to put Malaga to the sword and give Sevilla a deserved 2-1 win against Malaga
Malaga’s goal came through Charles in the second half, but it eventually proved to be just a consolation

Villarreal Vs Real Betis 0-0
Villarreal and Real Betis played out an uninspiring 0-0 draw in their weekend match up Both teams had only 2 shots on target each all game, and it is no surprise that the match ended goalless.