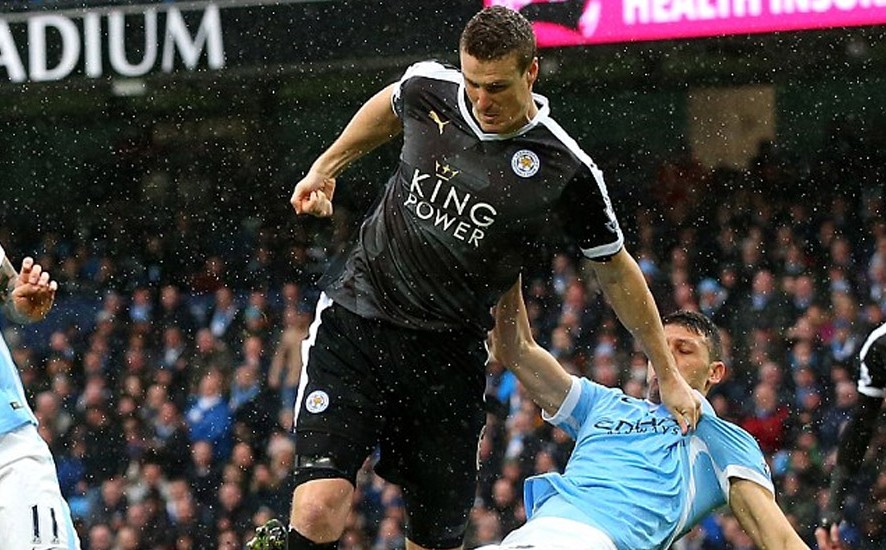 Chelsea Vs Manchester United 1-1
Diego Costa snatched an injury-time equaliser to secure Chelsea a 1-1 draw against Manchester United and preserve the Premier League champions’ unbeaten run under Guus Hiddink.
Kurt Zouma was carried off on a stretcher shortly after half-time with what looked to be a serious injury to his right knee and Jesse Lingard turned home in fine style just two minutes later to put the visitors ahead.
As a first Premier League win in seven over the champions for United neared, Costa pounced in the dying minutes to preserve Chelsea’s unbeaten run since Jose Mourinho was sacked, which now stands at 11 games in all competitions.

Manchester City Vs Leicester City 1-3
Leicester City took a significant step in their sensational bid for the Premier League title with a ruthless 3-1 win at Manchester City.
The home team were football betting favourites to replace Leicester at the summit at kick-off, ambitions that were soon dented when Robert Huth handed Leicester a second-minute lead at the Etihad Stadium.
Riyad Mahrez danced through a shambling defence to brilliantly score his 14th Premier League goal of the season before Huth headed his second, with Sergio Aguero’s strike coming too late to deny Leicester a six-point advantage at the top.

Liverpool Vs Sunderland 2-2
Liverpool collapsed from a two-goal lead to draw 2-2 with Premier League strugglers Sunderland on Saturday.
A fine cross from the left wing by James Milner, aimed deep in towards the far post, picked out Roberto for a firm header as the Brazilian continued his fine recent form in front of goal.
The impressive Firmino was not done there, turning provider after 69 minutes for Lallana to tap in as the Reds capitalised on their chances coming thick and fast.
However, the mood turned in the closing stages as, moments after swathes of the home crowd began a mass walkout over ticket prices, Adam Johnson netted a free-kick for the Black Cats.
Seven minutes later, Jermain Defoe beat Mamadou Sakho all ends up to find space for a shot past Simon Mignolet, sending an already quieter Anfield into shock.

AFC Bournemouth Vs Arsenal 0-2
Arsenal leapfrogged Manchester City into third as the Gunners reignited their Barclays Premier League title challenge at Bournemouth on Saturday.
Mesut Ozil gave Arsene Wenger’s side the lead in the 23rd minute when he slammed home Olivier Giroud’s knock-down before Alex Oxlade-Chamberlain doubled the lead barely 90 seconds later with a powerful low finish off the inside of the post and gave supportive football betting fans a rewarding cash-in.
Bournemouth came out after the interval re-energised as they put the visitors under pressure but Eddie Howe’s side lacked the cutting edge to slice through Arsenal’s back line.

Tottenham Vs Watford 1-0
Kieran Trippier’s second-half goal gave a dominant Tottenham a 1-0 win over Watford at White Hart Lane on Saturday and moved Mauricio Pochettino’s men into second-place in the Premier League.
The home side headed into the game knowing that a win would see them leapfrog Manchester City after their defeat to leaders Leicester, and Trippier finally broke the Hornets’ dogged resistance in the 64th minute with a back post tap-in from substitute Dele Alli’s cross.

Celta De Vigo Vs Sevilla 1-1
Daniel Carrico gave Sevilla the lead against the run of play just before half time.  But Midfielder Claudio Beauvue who only signed for the club in last month’s transfer window equalized with 64 minutes gone to salvage a deserved draw for Celta.

Granada Vs Real Madrid 1-2
A spectacular strike from Luka Modric secured a vital 2-1 victory for Real Madrid away to Granada in La Liga betting on Sunday.
Zinedine Zidane’s side went into the match with a seven-point deficit to leaders Barcelona, and were unable to recapture the form which saw them fire six past Espanyol a week ago.
Karim Benzema put Madrid ahead after half an hour but Granada, who had a goal disallowed for offside in either half, deservedly levelled the match through substitute Youssef El-Arabi, though the visitors were frustrated at some accidental interference on Modric from referee Jesus Gil Manzano.
Yet Modric turned hero for his side as he rifled in from distance with five minutes to play to move Madrid back to within four points of Barca.

Levante Vs Barcelona 0-2
Barcelona marked Luis Enrique’s 100th game as coach of the club with a 2-0 victory over La Liga’s bottom side Levante at Estadio Ciudad de Valencia on Sunday.
Luis Enrique completed a century of matches in all competitions at the Barca helm with an 80th win as Luis Suarez’s second-half stoppage-time strike added to an early own goal from Levante captain David Navarro.

Atletico Madrid Vs Eibar 3-1
Fernando Torres finally scored his long-awaited 100th Atletico Madrid goal as they came from behind to defeat Eibar 3-1 at Vicente Calderon.
A slip from the 21-year-old enabled Keko to open the scoring early in the second half for Eibar, but Jose Maria Gimenez headed in at the near post in the 56th minute to restore parity.
Saul then made up for his earlier error by nodding Atletico ahead, but the scoring was completed by Torres with 91 minutes on the clock.

Athletic Bilbao Vs Villarreal 0-0
Athletic Bilbao played a goalless draw in a match that promised much but offered very little. And La football betting fans would have been frustrated with what could be seen as a lack of will from both sides to go for the win.