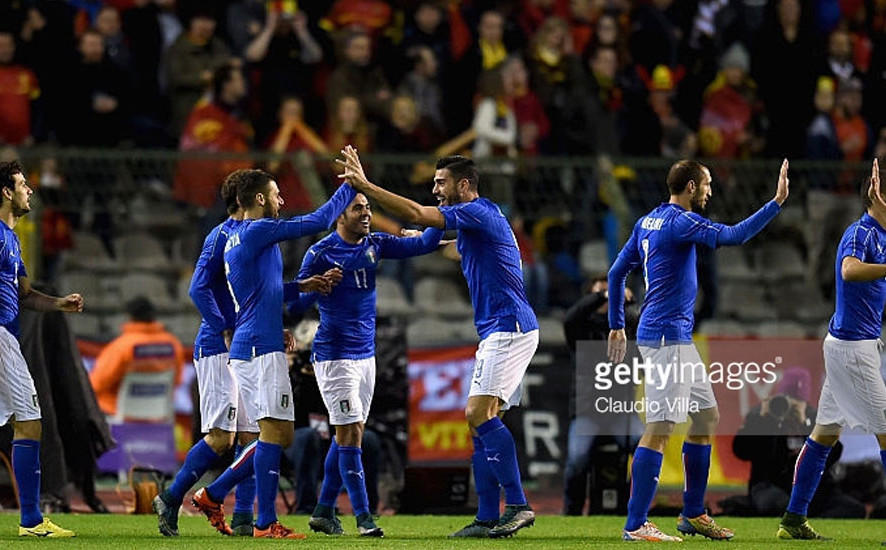 Russia Vs Portugal 1-0
Captain Roman Shirokov scored the only goal of the game with a minute remaining to give Russia a deserved 1-0 friendly win over Portugal.
Russia peppered the Portugal goal throughout Saturday’s friendly contest in Krasnodar, but were seemingly heading for a frustrating stalemate.
However, skipper Shirokov came up with the goods in the 89th minute when he side-footed home from close range to finish a fine Russia move.

Belgium Vs Italy 3-1
Kevin De Bruyne and Michy Batshuayi gave Belgium their first victory as the world’s top-ranked nation with a late strike to secure a 3-1 win over Italy in Brussels.
Manchester City’s De Bruyne struck with 16 minutes to play on Friday before Marseille man Batshuayi sealed the win late on to extend Belgium’s unbeaten record at home to 11 games, a run that stretches back two years.
Their record was in danger at times against Italy though, especially when Antonio Candreva opened the scoring after just three minutes.
Jan Vertonghen quickly restored parity with a well-placed header before both sides wasted a plethora of chances prior to De Bruyne’s strike.
Substitute Batshuayi added gloss to the result in the closing 10 minutes as Belgium celebrated becoming world number one with an impressive win.

France Vs Germany 2-0
Although the France Vs Germany friendly match that held in Paris came to stuttering pauses several times as everyone checked if they were still safe at the sound of bomb blasts, it was still an impressive game.
Olivier Giroud and Andre-Pierre Gignac were on target but Anthony Martial totally stole the show as France beat Germany 2-0 on Friday.
Martial beat three defenders on a slaloming run down the left byline before teeing up Giroud for the opener in first-half injury time and Gignac – who came on for Giroud in the second half – headed home a second four minutes from the end as Didier Deschamps’ men gained a measure of revenge for their 1-0 defeat to the world champions in the World Cup quarter-finals last year.

Spain Vs England 2-0
Mario Gaspar’s stunning overhead kick set Spain on their way to a 2-0 victory over England in Alicante.
Villarreal right-back Mario headed the only goal on his debut as Spain closed their Euro 2016 qualification campaign with a win in Ukraine but his latest effort is set to live longer in the memory.
Remaining forward from one of the countless, probing attacks launched throughout the 90 minutes by Vicente del Bosque’s men, Mario was picked out by a chipped pass from Cesc Fabregas and swivelled to acrobatically loop the ball past Joe Hart.
Arsenal midfielder Santi Cazorla was set up by fellow substitute Nolito to finish into the bottom corner six minutes from time, with the full-time score a fair reflection of the home side’s dominance.

Wales Vs Netherlands 3-2
Arjen Robben helped Netherlands to a 3-2 win over Wales in Friday’s international friendly in Cardiff.
Bas Dost opened the scoring around the half-hour mark, yet Joe Ledley restored parity on the stroke of half-time when he tapped home the rebound from Joe Allen’s saved penalty.
Robben then found the net in the second half after a trademark run down the right, only for Emyr Huws to once more level the scoring after a clever corner. Another Robben strike eventually made the difference in Netherlands’ favour, though.