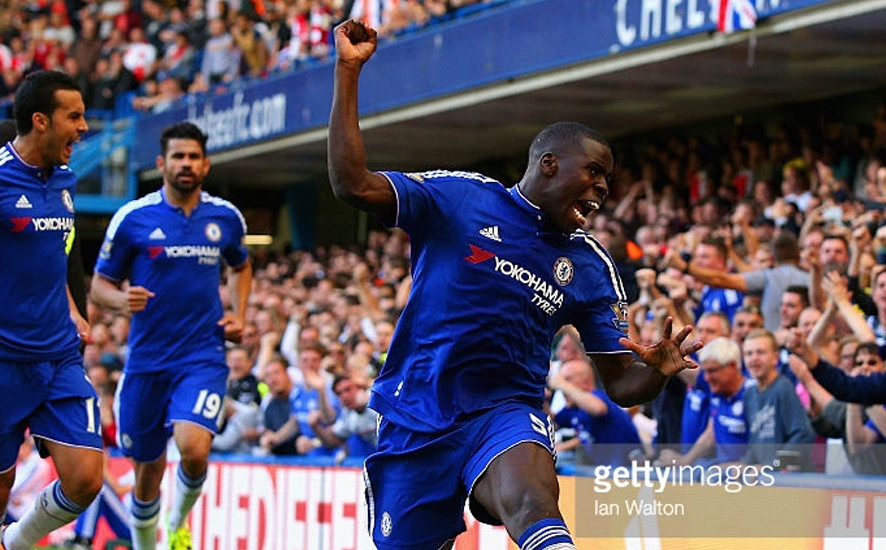 Everton picked up where they left off in their 3-1 win over Chelsea with a confident display of attacking football, with Ross Barkley and Steven Naismith providing chance after chance for Romelu Lukaku.
But Swansea City has their captain Ashley Williams to thank for a superb defensive performance, who made sure Swansea still remains unbeaten in 2015/2016. Everton’s Kevin Mirallas was red carded late on for a foul on Modou Barrow.  At the end though, neither team came out victorious while the match ended at 0-0.

Leicester City came from two goals down for the second consecutive Premier League game as they fought-back to draw 2-2 with Stoke City at the Britannia Stadium on Saturday.
Second-half goals from Riyad Mahrez and Jamie Vardy cancelled out earlier strikes from Bojan Krkic and Jonathan Walters, which had put Stoke two up midway through the opening period.
Leicester, who came from behind to beat Aston Villa 3-2 last time out, are now unbeaten in 10 league matches stretching back to last season . Stoke however remain without a win this season.

A double from in-form Odion Ighalo gave Watford a 2-1 victory over Newcastle United at St. James’ Park as the hosts’ dismal start to the new season continued on Saturday.
The forward scored his third and fourth Premier League goals with a pair of cool finishes inside the first half-hour.
Daryl Janmaat struck after the break with a well-taken goal as Newcastle threatened a comeback, but Watford held out for an impressive win.
This win makes it two consecutive wins for Watford as they are gradually showing that they are not just in the premier league to fill up numbers. 🙂

It looks like Manchester City is about to lose their place as No.1 and title favourites as the league leaders were beaten for the first time this season as West Ham United collected another major Premier League scalp with a stunning 2-1 win at the Etihad Stadium.
Slaven Bilic’s team returned with three-point hauls from their opening two away matches at Arsenal and Liverpool and they continued a remarkable run on their travels by halting City’s 100 per cent record.
Fans, sport betting experts and pundits alike wouldn’t have envisaged this result, going by Man City’s form. But they were obviously suffering from hangover after losing by the same score line to Juventus midweek.
Victor Moses and Diafra Sakho put West Ham two goals up, before Kevin De Bruyne pulled one back for Man City. But it wasn’t enough to deny West Ham its precious win.

Looking back to our previous article about Chelsea’s losses and Mourinho’s attitude, it looks like they’re getting their confidence back. It wasn’t a happy return to Stamford Bridge for former Chelsea goalkeeper Petr Cech as Diego Costa again proved the decisive figure as Chelsea beat Arsenal 2-0 in a controversial clash at Stamford Bridge.
The Spanish striker provoked a red card for Arsenal defender Gabriel late in the first half with Santi Cazorla also seeing red in the second period as the visitors self-destructed.
Kurt Zouma headed Jose Mourinho’s men into the lead after 53 minutes and a late, deflected effort from Eden Hazard secured a much-needed win for Chelsea in stoppage time.

A goal from English striker Saido Berahino was enough for West Brom to secure a precious 1-0 away win over Struggling Aston Villa who have now gone five games without a win.
Chances were few and far between for both teams, and although Aston Villa’s Micah Richards correctly had a goal disallowed, Aston Villa never really looked likely to equalise.

Bournemouth finished as comfortable 2-0 winners against struggling Sunderland, with in-form striker Callum Wilson opening the scores before Matt Ritchie secured the win with a superb volley at long-range.
Sunderland failed to provide a consistent goal threat and they can have no complaints about this loss which sends them back to the bottom of the table.

Heung Ming Son scored his first Premier League goal to earn Tottenham a 1-0 win over Crystal Palace at White Hart Lane.
The win takes Tottenham out of the bottom five, being their 2nd win in a row in the premier league and a 3rd win in a row in all competitions after their midweek Europa League win over Qarabag. Tottenham deserved the win, after a consistent and almost faultless performance.

Anthony Martial netted a double to guide Manchester United to a 3-2 victory over Southampton in Sunday’s Premier League encounter.
Southampton will feel they should have won this game comfortably after going ahead via Italian Striker Graziano Pelle’s efforts, as they had other chances to extend their lead. But Anthony Martial equalised after showing great composure, and the youngster was on-hand again to give United the lead with a cool finish after capitalising on a poor back pass from Southampton defender Maya Yoshida. Juan Mata scored in the 68th minute to put the game to bed. Graziano Pelle scored his second goal of the game to make it 3-2, but it was a little too late as they couldn’t equalise before the end of the match.

Liverpool did little to alleviate the mounting pressure on Brendan Rodgers after Russell Martin cancelled out Danny Ings’ first goal for his new club to salvage a 1-1 draw for Norwich City at Anfield on Sunday.
Brazilian Midfielder Phillipe Coutinho had the chance to win the game for Liverpool when he went one on one against John Ruddy. Norwich was forced to withstand great pressure towards the end, but the visitors ultimately stuck to their task well and kept Liverpool at bay, though Rodgers’ side will no doubt see it as a missed opportunity to return to winning their ways.