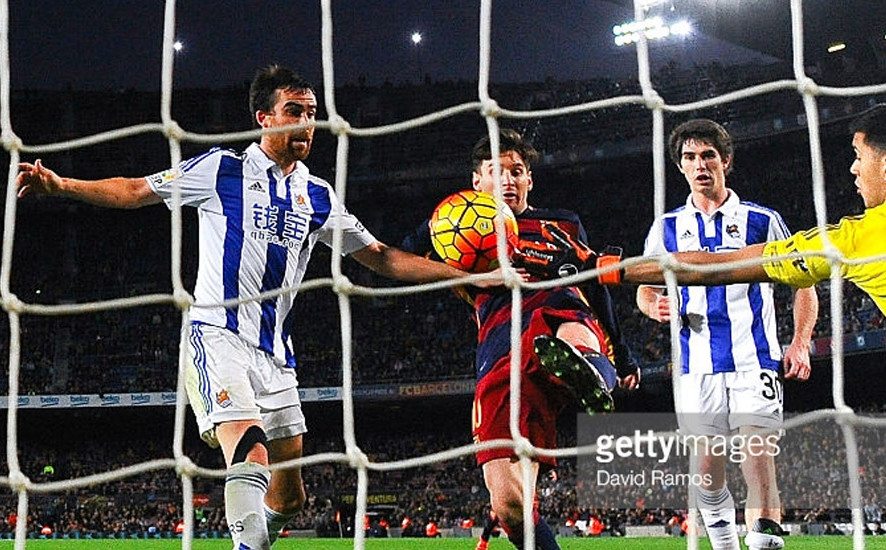 Eibar Vs Real Madrid 0-2
Gareth Bale and Cristiano Ronaldo scored at the end of each half to give Real Madrid a 2-0 victory over Eibar, which moves the Blancos within six points of leaders Barcelona.
After taking a Clasico thumping last weekend and conceding three to Shakhtar Donetsk in midweek, Madrid were in need of a response, but laboured to victory against the Basque side with Ronaldo struggling badly in front of goal before he netted a late penalty.

Getafe Vs Villarreal 2-0
Angel Lafita and Alvaro Vazquez each scored either side of Half time to give Getafe a shocking 2-0 win over Villarreal at the Coliseum Alfonso Perez. Villarreal had come into the game in good form, but Angel Lafita opened the scoring in the 21st minute to show a sign of things to come. Shortly after Half-time Alvaro Vazquez made sure of the points.

Rayo Vallecano Vs Athletic Bilbao 0-3
A hat-trick from in-form striker Aritz Aduriz was enough to give Bilbao a 3-0 win away from home against Rayo Vallecano. In truth, the match never really looked like much of a contest going into the game, and in the first minute of the game Aduriz expelled any hopes of a miracle by scoring. Two more goals in the 24th and 60th minute by the same player was enough to bury the match as a contest.

Sevilla Vs Valencia 0-1
Sergio Escudero scored the only goal of the game on his debut as Sevilla edged out nine-man Valencia at the Sanchez Pizjuan in La Liga on Sunday.
Escudero’s moment came at the beginning of the second half after Joao Cancelo had already been dismissed, with Ever Banega’s beautifully crafted pass presenting an opportunity the left-back couldn’t miss.

Atletico Madrid Vs Espanyol 1-0
Antoine Griezmann scored the only goal of the game as Atletico Madrid beat Espanyol 1-0 to ensure they remain just four points adrift of La Liga leaders Barcelona.
Fresh from netting both goals in Atleti’s 2-0 Champions League victory over Galatasaray, Griezmann nudged the hosts ahead with an exquisite finish inside the opening three minutes.

Barcelona Vs Real Sociedad 4-0
Neymar finished a fine team move to open the scoring 22 minutes before another superb Luis Suarez volley made it 2-0 a few moments before half-time, just as Sociedad had begun to threaten.
Barca made it three with Neymar’s second early in the second half as the Catalans moved into cruise control and Lionel Messi grabbed a late fourth, with Claudio Bravo largely a spectator throughout the 90 minutes.

Celta Vigo Vs Sporting Gijon 2-1
Fabian Orellana and Celta Vigo top scorer Nolito both scored a goal in each half to give Celta vigo a 2-1 win over Sporting Gijon who had earlier grabbed an equalizer through Carlos Castro.
Orellana scored with a cool finish into an empty net after a misunderstanding in the sporting penalty area. Carlos Castro scored a well-placed left footed finish when one on one with the keeper. The winning goal from Nolito came in bizarre fashion as the Sporting Gijon goalkeeper’s attempted clear out struck the striker and went straight into the back of the net.

Las Palmas Vs Deportivo La Coruna 0-2
Las Palmas have needed no help in losing since the start of the season, and they will continue to rue their hard luck for weeks to come, as they lost 2-0 to Deportivo la Coruna , via an own goal from David Simon and a late goal from Deportivo player Lucas.

Malaga Vs Granada 2-2
Malaga will be left dissatisfied for failing to win from a good position after going 2 goals up through Charles and Pablo Fornals. Malaga was controlling the game, but they gave it all away as 2 goals in 3 mins (83rd and 86th) from Youssef El-Arabi and Ruben Rochina salvaged a point for Granada.

Levante Vs Real Betis 0-1
Real Betis moved into the top half of La Liga following a 1-0 victory at Levante, with Ruben Castro scoring his eighth goal of the season.
Pepe Mel’s side took just four minutes to break the deadlock, Ruben Castro bending a fine finish into the bottom corner after brilliant link-up play with Joaquin.