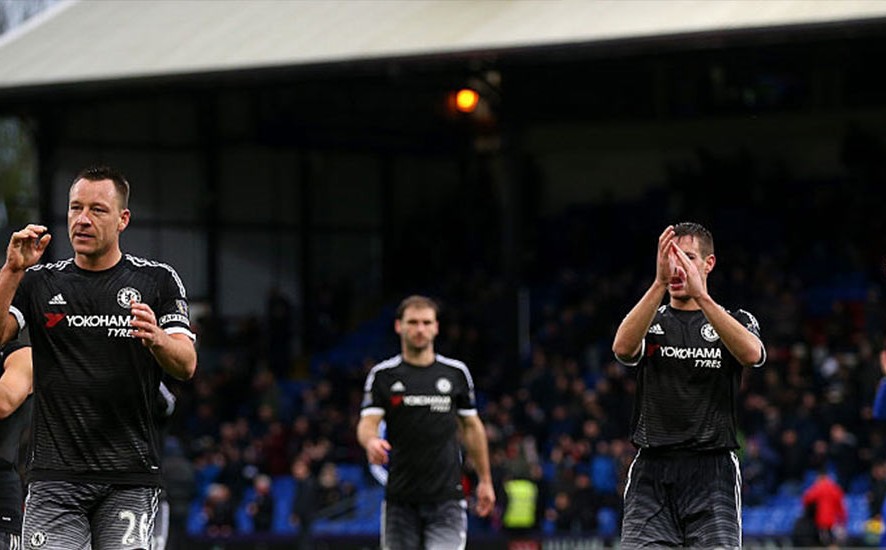 Everton Vs Tottenham Hotspurs 1-1
An excellent goal from Dele Alli earned Tottenham a 1-1 draw with Everton on Sunday, after Aaron Lennon had opened the scoring against his former club.
Mauricio Pochettino’s side were the dominant force in the first half but were shocked when Lennon drilled home the opening goal with Everton’s first effort of the game.
Spurs, who had twice hit the woodwork in the opening period, drew deservedly level through a fine Dele Alli finish – his fourth league goal of this season.

Arsenal Vs Newcastle United
Laurent Koscielny netted the only goal of the game as Arsenal went two points clear at the top of the Premier League with a less than convincing 1-0 victory over struggling Newcastle United on Saturday.
Koscielny, along with Nacho Monreal and Mathieu Flamini, was one of three Arsenal changes from the 2-0 win over AFC Bournemouth last time out and the French defender’s 72nd-minute effort proved decisive at Emirates Stadium.

Crystal Palace Vs Chelsea 0-3
A delight to sport betting fans on Sunday, Guus Hiddink stormed to the first win of his second spell at Chelsea as the reigning Premier League champions displayed some of their old prowess in a 3-0 triumph at Crystal Palace.
Unbeaten in four matches since Jose Mourinho’s departure, Chelsea are now six points clear of the relegation zone after Oscar, Willian and Diego Costa scored in a dominant London derby victory.

Leicester Vs Bournemouth 0-0
Riyad Mahrez missed what could have been a decisive penalty as Leicester City lost ground at the top of the table in a 0-0 draw with 10-man Bournemouth.
The Foxes needed at least a win to keep pace with Premier League leaders Arsenal on Saturday, but failed to put away a host of chances despite threatening on several occasions.

Manchester United Vs Swansea 2-1
Wayne Rooney scored a superb winner as Manchester United ended their Swansea City hoodoo and gave some football betting fans something to smile about with a 2-1 victory at Old Trafford on Saturday to ease some of the pressure on manager Louis van Gaal.
After dominating the early stages, Van Gaal’s men allowed Swansea back into the match, with Morgan Schneiderlin surviving penalty claims for an alleged handball.
But the breakthrough came two minutes into the second half when the impressive Ashley Young supplied the cross for Anthony Martial to score his eighth United goal.
Swansea refused to go down without a fight and, after Andre Ayew hit a post, Gylfi Sigurdsson restored parity with a looping 70th-minute header.
However, Rooney had the final say, with his flicked finish sending United into the top five while Swansea remains one place above the relegation zone.

Watford Vs Manchester City 1-2
Yaya Toure and Sergio Aguero both netted late goals as Manchester City came from behind to beat Watford 2-1 at Vicarage Road on Saturday.
City, who last won on the road in the league at Crystal Palace in September, looked set to slip six points behind leaders Arsenal in a tumultuous title race when Aleksandar Kolarov headed into his own goal after 55 minutes.
Serbia defender Kolarov atoned for his error, however, by delivering the corner that Toure met with an emphatic left-foot volley eight minutes from time.
Aguero, who appeared painfully short of match sharpness for much of the contest, then rose unchallenged three minutes later to guide Bacary Sagna’s excellent right-wing cross home.

West Ham United Vs Liverpool 0-2
Michail Antonio and Andy Carroll both scored as Liverpool were beaten 2-0 by West Ham at Upton Park on Saturday afternoon.
Antonio’s header gave the hosts an early lead at Upton Park before both sides hit the woodwork in an entertaining first half.
Carroll put West Ham in control with a typically towering header 10 minutes into the second period to leave Jurgen Klopp’s side with a mountain to climb.

Valencia Vs Real Madrid 2-2
Valencia denied former manager Rafael Benitez a much-needed win on his return to Mestalla as Paco Alcacer’s late header earned his side a 2-2 draw with 10-man Real Madrid
Karim Benzema had opened the scoring with a well-worked early goal to silence the home crowd, but Gary Neville’s men were rewarded for their endeavour when captain Dani Parejo levelled from the spot before half-time.
Mateo Kovacic – in for James Rodriguez following the Colombian’s reported speeding incident in midweek – was sent off 21 minutes from time for a poor challenge, although Bale looked to have given his manager breathing space when he nodded in Toni Kroos’ delivery eight minutes from time.
However, when Alcacer headed home unmarked a minute later, Neville – still to mastermind a league win – was ensured a deserved point, while Benitez was left to rue another sloppy display.

Atletico Madrid Vs Levante 1-0
Atletico Madrid went two points clear at the top of La Liga as a blunder from Levante goalkeeper Diego Marino gave Diego Simeone’s side a 1-0 win on Saturday.
The hosts struck the crossbar three times, while striker Jackson Martinez squandered a host of opportunities to break the deadlock.
Martinez was withdrawn in the 73rd minute and it was his replacement Thomas who made the crucial impact nine minutes from time.
The 22-year-old’s tame effort somehow slipped under the arm of Marino to wrap up all three points and send Atletico first as they bid to regain the title they lost to Barca last season.

Espanyol Vs Barcelona 0-0
Lionel Messi and Luis Suarez both hit the woodwork as Barcelona were held to a 0-0 draw against Espanyol that gives Atletico Madrid the opportunity to take sole ownership of top spot in La Liga.
Espanyol set their stall out from the off at Cornella El Prat, with their intensity and aggression proving an effective means of nullifying their more illustrious neighbour’s wealth of attacking talent.
Barca were far from at their best but for all Espanyol’s hard work, the hosts still had to rely on the help of the frame of the goal to claim an unlikely point.

Real Betis Vs Eibar 0-4
Eibar produced a master class display to comfortably see off Real Betis 4-0 away from home.
First half goals from Ander Capa and Keko set Eibar on their way, and even after half time they didn’t rest on their laurels as further goals from Adrian and Borja secured an impressive win for La Liga’s surprise team who lie in 8th place.

Granada Vs Sevilla 2-1
First Half goals from Success Isaac and Penaranda were enough to give Granada a much needed 2-1 win over Sevilla who also scored in first half stoppage time by Vitolo, but it eventually proved to be a consolation as Granada saw the match out.