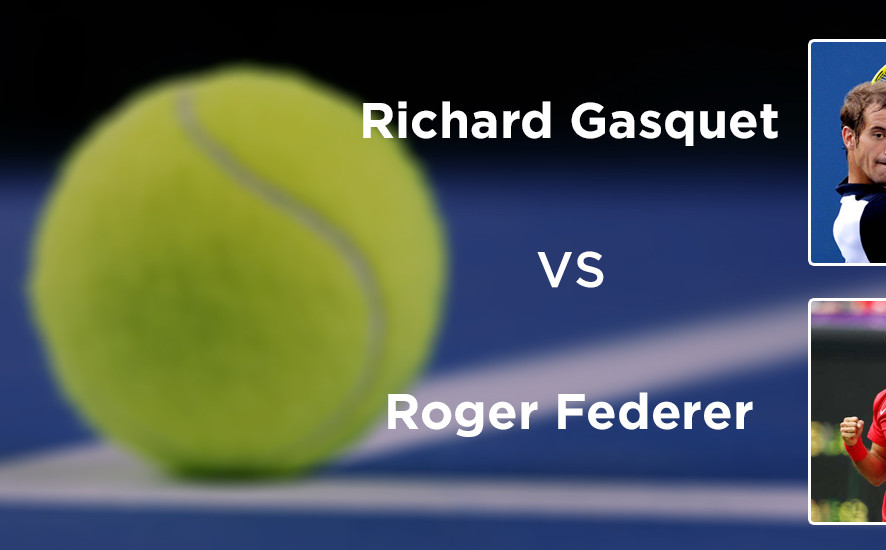 If Federer could hand pick his top-20 opponents in a major quarter final, Richard Gasquet would feature really high on his list, with the Gasman having very little competition to offer in this match-up.

The deep-thinking and sensitive Gasquet often talks about how he has ‘good’ or ‘bad’ feelings when he steps onto the court and there are no prizes for guessing which it will be on Thursday morning.

Federer has owned this career series to such an extent that Gasquet’s only two wins in 16 matches against the Swiss came on slow clay in Rome and Monte-Carlo six years apart.

Their last half a dozen meetings have been very one-sided indeed and Gasquet often walks on the court against Federer with the slump shouldered look of a man who knows he’s about to get heavily beaten however well he plays.

The last time that they met ended in Gasquet retiring with a back problem in Dubai at the end of February after one set, but looking at the last 12 sets contested between them we see that only three have gone past 6-3 and none past 6-4 in Fed’s favour.

Gasquet’s defensive court position leaves him vulnerable to the attacking play of Federer and with the latter having adopted an even more attacking policy on return of second serve it’s hard to see what the Frenchman can do to turn this around.

Federer will no doubt be delighted that he’s facing Gasquet and not Tomas Berdych, who has beaten the Swiss here in the US Open quarter finals before, and has the tools on his day to defeat Federer.

But Gasquet put a stop to all of that with a four set win over Berdych, who has been some way off his best form this summer and in fairness to Richie he has played some of the best tennis of his career this season.

He generally falls short against the top-10 though, with just a 25 percent winning mark versus such opposition, and against the top-five he’s 9-47 in his career, with the 11-9 final set win over Stan Wawrinka at Wimbledon this summer being the first such success since two victories over David Ferrer in the autumn of 2013.

With Gasquet usually struggling to hold serve against Federer – and that was before Fed adopted his ‘SABR’ (”sneak attack by Roger”) return routine – the Baba Ijebu team looking at the handicap here, with -7.5 games on the Swiss a viable 1.08 shot.

This one will be played at around 7 p.m. New York time (12 a.m. local) and at least one thing that will please Gasquet is that it won’t be in the heat of the day where the Frenchman has been known to often struggle. But we’re struggling to find much else in his favour here, with Federer looking in peak form and no doubt he’ll have been delighted to face the tricky John Isner instead in straight sets.

That game was a night match on Ashe so it was a nice way of attuning to conditions for Federer, while Gasquet is yet to play on the new Ashe at all in a match situation.

Bigger-priced punters might well look to the Federer [7-5] at a tasty 8.00, with Gasquet likely to need time to adjust to night conditions and in any case three of the last five sets between Fed and Gasquet have ended 6-2 to the Swiss.